After a crazy 1st stop in Jozi it was time for the South African Wakeskate Tour to head down to the South Coast of KZN for Stop 2, Backyard Sessions. The Umtamvuna River Lodge would play host to its 3rd year of the event which seems to get better and better each year.

The day kicked off with the Junior division with all the kids pulling together super impressive performances, showing great signs for the future of South African Wakeskating. Then it was time for the Pro and Ladies divisions to get underway. The event unfortunately had to see the withdrawal from current US Tour Champion and SA Tour leader Andrew Pastura due to an injury incurred during filming leading up to the event.

Never the less the first Semifinal saw Sean Bacon, Cole Kraiss, Kaylib Louw and Troy Allers go at it for the top 2 spots to advance to the final. Kaylib Louw who was a late entry and not sure if he was able to ride until the morning of the event due to injury, came out swinging with 2 solid and impressive lines, unfortunately they were not enough to edge out Sean Bacon and Cole Kraiss who secured their spots in the final with technical and clean runs.

The second Semifinal saw American Andrew Roehm go against locals Matti Buys, Justin White and Dale Nieuwstad. With the tide still relatively high the low rails proved to be a little trickier than originally thought. The riders still managed to put down some solid lines, with Andrew and Matti coming out on top qualifying through to the finals.

The Ladies final saw Slovakian Zuzana Vrablova, Nikki Pavlakis and Leanne Louw go head to head. Nikki riding in her first ever contest showed no nerves at all, hitting the incline after a few bumps and bruises and combining it with some solid flat tricks to ensure her 2nd place finish. Zuzana once again showing her experience and came away with the win with solid hits on the incline combined with a clean Shuv and 3 Shuv to take the ladies win.

The 4 man final was set to kick off in extremely variable conditions with what looked like a storm approaching and gusty winds. Sean Bacon who has been one of the most consistent performers of the season pulled together a solid run right at the end of the heat with a mix of flip tricks and solid rail hits to secure him his second consecutive finals finish of the year and a solid seeding in the tour. Andrew Roehm, who is also the creative mind behind the up and coming wakeskate movie Istudiomo, pulled together a technical run with the only Varial Heelflip of the contest to get his spot on the podium. Cole Kraiss who had been killing it the whole of his SA trip was impressing everyone with his gigantic 270 Shuv Front Boards on the flat bar along with a crazy Back Lip to get him safely in the 2nd place position. Matti Buys kicked things off with a few solid lines showing he was comfortable in his backyard. The combination of technical switch and regular flat tricks and solid rail hits were enough to get him the top spot and to take over as current leader of the tour.

All in all, the event showed promise for the South African Wakeskate scene in both participation and the level of riding. Special thanks goes out to the sponsors who pulled together to make it possible; Fox, Red Bull, DC Shoes, Umtamvuna River Lodge, The Boarder Post, Estuary Hotel and Conference Centre, Mac Bananas, Surfs Up Mattison Square. 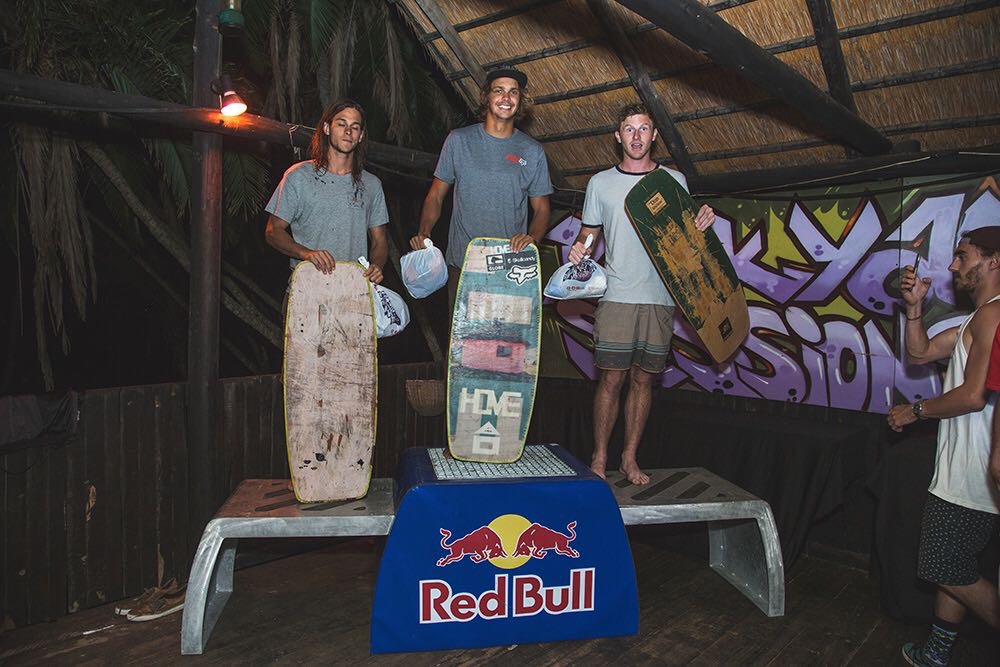